About MercatorGear.com: We are an official importer and retailer of specialist backpacking, expedition and camping stoves and adapters from KOVEA. We will soon open our new EU distribution centre in Gaggenau, Germany so we can better serve our European customers.

We are deeply engaged with the specialist stove-using community. MercatorGear.com provides advice and technical support. We help users of all types, from beginners, to solo adventurers and expeditions in many parts of the world. Because we are interested in all things stoves and their users, we also provide sponsorship for projects which we find particularly interesting and inspiring (see Our Adventurers, below) 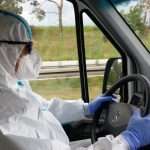 Covid-19-Statement: Thankfully, MercatorGear.com has been largely unaffected by the global pandemic. The main impact is that some postal deliveries are experiencing delays due to staff shortages.

Some of our adventurers are now fully engaged in helping to defeat the virus. Damian (pictured, left) is now helping out by driving ambulances in his home town while planning his attempt to cycle to the South Pole.  Marco & Laura (see below) are Red Cross First Responders in Bergamo. You guys are an inspiration to us all. A big THANK YOU! 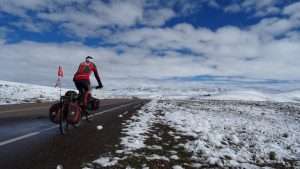 Every year MercatorGear.com supports adventurers with interesting and challenging ideas for trips. Some are solo ultra-light users, other require gear for prolonged use in extreme conditions. We provide technical support and gear sponsporship so that they get the best out of their trips, and have maximum fun in the the process. Here are just a few of the inspirational folks we work with… 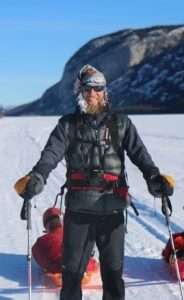 The 1000-mile (1600-km) Iditarod Trail Invitational held in March each year is one of the toughest extreme cold races in the world.  Because the trail is mainly beneath fresh snow, the going can be incredibly demanding and it’s easy to get lost in deep snowdrifts and soft powder.  In some areas wind speeds can be over 100 mph, with relative temperatures below -100F (-75oC).  On the sea ice over Norton Sound on the Bering Sea, open water becomes a real hazard because there is a real risk of falling in.  Mark has completed race on foot together with 7 other foot racers, plus 17 cyclists, on the route from Anchorage to Nome.

Mark uses uses the reliable and well tested KOVEA Booster+1 expedition stove for snow melting in the most extreme temperatures. He also uses a KOVEA Spider for melting and water boiling in cold (-20oC) but less challenging conditions.

Single Handed Cycle Around the World

We are very pround to support Sarah Fisher who is currently planning a circumnavigation of the world by bike, with the use of only one hand. Watch this space for more details. 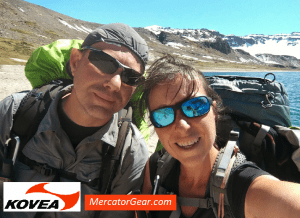 MercatorGear.com is proudly supporting experienced Italian long-distance trail walkers and adventurers Marco & Laura (2cuorincammino.it). The couple have undertaken the ambitious coast to coast “Camino” from Malago on the Mediterranean coast, to Muxia on the Atlantic coast; a total distance of 1335km (830 miles). Using social media posts and blogs, their aim is to allow people who can’t walk because of illness, disabilities or age to “dream” with them and to bring their dreams to Santiago de Compostela! 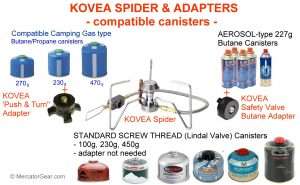 Marco & Laura chose the KOVEA Spider ‘Global Explorer‘ with adapters for use with different types of gas canister while on the trail. After 54 days on the trail Laura, Marco and their KOVEA Spider reached the end point by the Atlantic Ocean at Muxia in Galicia, Spain. Congratulations on a fantastic achievement!

You can follow Marco & Laura’s ongoing adventures here: https://2cuorincammino.it/ and at their awesome new social enterprise “Zero to Wild“ 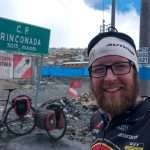 We are supporting bike adventurer Damian Drobyk in a ground breaking attempt on the longest unsupported cycle ride to the South Pole. The route starts at sea level at the famous McMurdo Antarctic research station in the summer of 2022/23. It will take around 30 days to cross the Ross Ice Shelf, and up to the South Pole 1000km away, at 3000m altitude. With temperatures down to -30oC (-22oF) Damian will be relying on his KOVEA gear to keep him fed, hydrated and motivated because he will need kit he can reply on. It will take him all the way to the most remote spot on the planet.

The expedition will highlight the role of bicycles in reducing carbon dioxide emission, as well as highlighting the imminent threat of rising sea level. 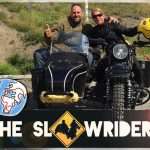 Oliver & Corinne “Slow Riders”: Switzerland to S.Africa and back by motorbike & side car

Corinne & Oliver Beccarelli are “The Slow Riders” undertaking the ultimate overland expedition from Switzerland to South Africa and back. Their chosen vehicle is the Ural Sportsman motorbike and side car because it is virtually indestructible. So far survived thousands of miles of rough roads will only basic maintenance. Their stove is equally indestructable KOVEA Booster+1 expedition stove which they are running on petrol/gasoline which they pick up on the road. Some of the available fuel is of low quality, but with regular maintenance their Booster+1 keeps on delivering morning coffee and dinner in idyllic places along the way.

Check out their progress and excellent movies at their website here: https://theslowriders.ch/ 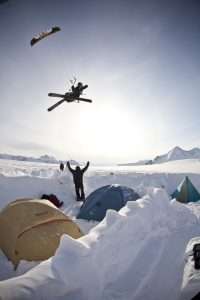 KOVEA and MercatorGear supported the innovative and daring German expedition to make the first ever kite-assisted attempt on America’s 5th highest mountain, the remote 4,996m Mt Blackburn, Alaska. Temperatures at the glacier base camp were regularly below minus 20oC (-4oF), and the team relied on the KOVEA Booster+1 expedition stoves to melt snow for every drop of water required over the three week period.They needed such a reliable stove because their lives depended on it.

See the expedition movie, here: “Blackburn2014”  and be amazed at what is possible with the right gear.

The company’s range of specialist stoves draw on several decades of R&D, design and volume production experience. KOVEA stoves have rapidly become a hit with users due to their exceptional design and build quality. All key products are manufactured in high-wage South Korea so that the highest quality standards can be maintained. KOVEA avoids manufacturing key components “on the cheap” in low wage economies. The company’s approach to innovation and design is reflected in International Design Awards for some of its new outdoor products.

KOVEA is at the forefront of stove innovation. Here are just a few of the ground breaking products to come out of the KOVEA “Skunk Works” in recent years. 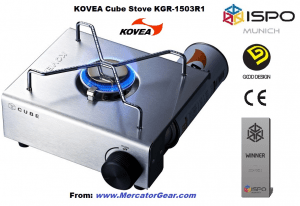 The KOVEA Cube stove (KGR-1503) if the first stove of it’s type to be built with a wipe-clean stainless steel body and advanced safety features including an auto-eject mechanism. It’s clean simple lines and quality construction have won it many admirers and awards including a prestigious ISPO Munich award.

You can read more about KOVEA design process, here 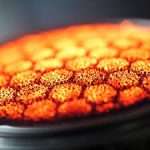 The KOVEA Alpine Master boils 1 litre of water in a blistering 2 minutes 40 seconds! 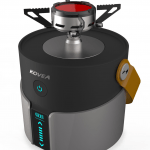 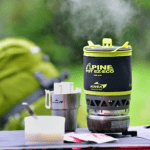 Academic Discount  We offer special academic discounts in recognition of the valuable contribution made by students and academics. If you are in the fields of science, engineering, environment, public policy & social development, we would love to hear about your research. The thing about MercatorGear.com is that we are really keen on cutting-edge research.  If you are at a Higher Education establishment in Europe or UK, please contact us with details of your field of study, and we will send you a 10% discount code.